Fund Project: Funded by the United Nations Industrial Development Organization and the National Development and Reform Commission: China Motor System Energy Conservation Project (F/CPR/0022) 1 Introduction Compressed air has been widely used in industry due to its clean, safe and convenient use. The company has been called the â€œfourth energy sourceâ€, and its energy consumption accounts for about 10% to 40% of its total energy consumption in most factories.1 However, compressed air is perhaps the most expensive form of energy because of the air compressor. Only 19% of the energy consumed can be converted into usable work, and 81% is lost as waste heat. The above data is only theoretical calculations, and does not take into account other losses of the system. 21. In recent years, with the rise of energy prices worldwide With the shortage of domestic electricity consumption, the government has paid more and more attention to improving the efficiency of motor system operation, and enterprises have begun to actively seek ways to reduce the energy consumption of compressed air systems. At present, some new energy-saving technologies have been developed, such as variable speed drive, central control, stable pressure and storage control, but each compressed air system has different dynamic characteristics. Each energy-saving technology has certain applicable conditions, only After comprehensive testing and analysis of the dynamic performance of the compressed air system, it is necessary to know whether the system has optimization space and which one or several energy-saving technologies can be used for system optimization.

2 Compressed Air System 1 System A typical compressed air system consists of several major sub-systems, including air compressors, power sources, controls, air handling equipment, accessories, and piping distribution systems, as shown. The air compressor draws in the atmosphere around it and presses it into the pipe set by the system. The reciprocating, screw and centrifugal air compressors are currently the most widely used. The power source provides power for air compressor operation. The control system regulates the amount of gas produced by the air compressor. Air handling equipment removes contaminants from the air and other accessories keep the system operating properly. The tubing distribution system is similar to an electrical circuit that delivers compressed air to where it is needed. Air storage in compressed air systems can also improve system performance and efficiency.

There are many methods for testing compressed air flow according to the theory of full life cycle cost analysis. The most effective method is to directly test the flow in the pipeline. The test system uses a thermal mass flow meter, which tests the pipeline according to the principle of heat conduction. The average gas velocity, which in turn calculates the system flow based on the pipe area. The biggest benefit of a thermal mass flow meter is that there is no need to correct for temperature and pressure.

The pressure sensor in the compressed air system test process cooperates with the data logger to record the pressure value of multiple points at the same time, so that the pressure gradient curve of the whole system can be drawn, and whether the pressure drop of the system is reasonable. In addition, combined with flow test data for comprehensive analysis, the relationship between system load changes and pressure changes can be given. There are several types and specifications of pressure sensors. The accuracy of the commonly used pressure sensor is 0. The range of power sensors can directly test the input power of the air compressor unit, and evaluate whether the air compressor responds promptly when the system load changes according to the power change. At the same time, the energy cost of the compressed air system can be estimated.

The computer is used to communicate with the data logger to set up and download test data.

4 System performance analysis 1 Incorrect application of compressed air In the following applications, improper use often occurs: open purge, spray, dust removal, atomization, employee cooling, manual spray gun, diaphragm pump, space cooling, vacuum venturi Tubes, etc., use unconditioned compressed air or supply air to waste equipment. It is a pressure-flow curve of a certain workshop drawn according to the test data of a company in Shanghai. In the workshop, there is a piece of equipment that uses dry air without pressure-regulated air to dry the metal parts of the conveyor chain. It can be seen that when the equipment starts working at 15 22, the compressed air flow in the workshop rises from 35m3/nin to 66m3/nin. It is a typical application of compressed air. When the process is required by pressure control or high pressure fan, the energy saving rate can reach more than 52%.

5 Conclusions (1) Compressed air is one of the most expensive forms of energy. It accounts for a large proportion of energy consumption in industrial enterprises. Its energy cost accounts for more than three-quarters of the life cycle cost. Many systems have certain energy-saving space. Measures should be taken to improve the operating efficiency of the compressed air system; turn down on page 8) Effect of the 5 triangle size on the performance curve The liquid obtains energy by interacting with the rotating blades, while the triangular annular cutting blade can eliminate the performance curve hump, but It will affect the lift and efficiency of the centrifugal pump. Therefore, the size of the triangular cut must be carefully selected. The numerical simulation analysis of CH) was carried out with positive triangular cutting blades with side lengths of 345, 67 and 8 nm, respectively. The head and efficiency of 08Q, 1.0 and 1.2Q were calculated respectively. The results are shown in Table 3, 4~5nm. The cutting effect is the best, and the design process point has little change in head and high efficiency.

Table 3: Cutting size and performance parameters The hump of the cutting dimension energy curve, the design flow point flow, head, and efficiency have little change, and has good engineering application value; under small flow conditions, the triangular cutting blade exit side, the centrifugal pump The pressure and velocity distribution of the internal flow field have significant influence, effectively balance the pressure difference between the front and rear cover plates of the impeller, and reduce the hydraulic loss of the impeller outlet and the interior of the volute. This paper numerically simulates the six cutting dimensions, and the results show that: The triangle size is in the range of 4rm~5nm, the performance curve of the pump is eliminated, and the head change is small and the efficiency is high. 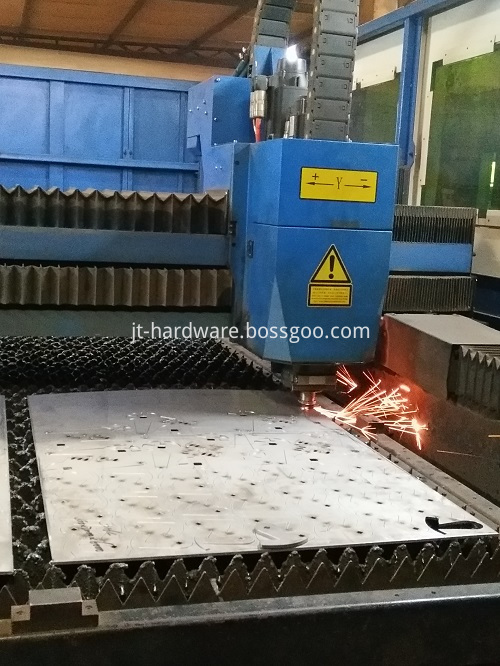